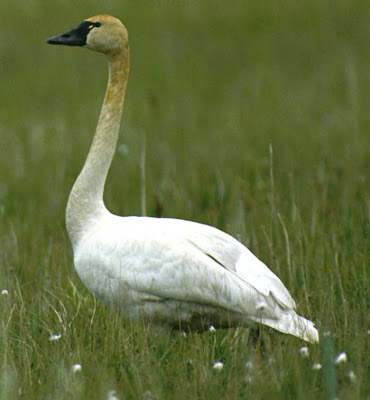 No this is not a story about the classic 12 days of Christmas' Seven Swans a Swimming.  I promise.  I can't promise you 5 golden rings if you read this post, that 6 geese will lay you some eggs or that any Lords will do any leaping. What I can hope for is that you will be enlightened and encouraged in some way.
One day coming home from carpool my daughter and I notice on the opposite side of the interstate, like interstate 10 going east, was this very large white bird.  He was pacing back and forth looking really lost and afraid.  We were headed west and our exit was quite a ways down the road.  I had to make a split decision whether I was going to turn around and go help this bird......I decided yes I would.
So we went to our exit and got right back on to the interstate. I was praying the whole way back the bird would not move and still be there when I got back.   I see the bird is still there as I pull up, so I park back away from him so he wouldn't run out into the interstate.  I realized how stupid this was, but I also saw this bird who looked panicked about what to do and where to go.  A swan in the headlights so to speak!  I look behind me and wait for a time when there was a break in the 18 wheelers that were flying by and then jumped out of the car.  I instructed my daughter to stand behind the car and just motion for people to slow down.
I start walking toward the swan and he actually started walking toward me so I stopped to see what he would do.  He stopped.  Then he turned around and zzzzzzzoooooooom a big truck went sailing by.  He was ok and just stood there.  So with a big break in the cars I started clapping and praying and saying "ok swan fly away", as I walked toward him again.  He then began to walk away from me, gaining speed more and more.  I watched and heard his little webbed feet as they pounded and scratched the pavement that was not made for web feet.  As he gained speed he began to gain altitude but he also was wandering left out onto the interstate. 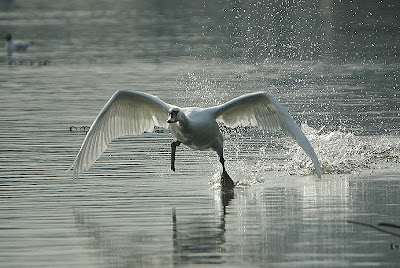 I looked back and pretty far away was a truck with a bed camper in the back.  I started really clapping and yelling, "come on swan, come on, faster faster".  I could tell as he was trying to gain vertical and he appeared to be tired.  We were standing on the backside of a hill, so we were beneath the draft he needed to get up under his wings.....here came the camper truck........Just as he got enough lift and the wind caught his wings he just barely cleared the camper top.  He continued gaining altitude as we jumped back in our car and followed him.  We exited the next exit (hard to drive btw while you are watching a swan) and saw that he went down on the other side of the interstate where I knew there was a lake...I was guessing but hoping at the same time.....We drove a few yards and pulled over but couldn't see the lake, so we went a little further til we could see a clearing in the trees and saw the water......and the swan.  HE FOUND IT!   There swimming, resting, drinking, and relieved was this swan.
I took a chance to save this poor bird from well.....you know.  It was a lesson for me that taking a chance to help someone else is yes rewarding for them, but the blessing in return far outweighs anything I have ever experienced.  Obviously this was not a person, but imagine if it was.  I can not tell you why I took an interest in this swan, but I am so glad I did.  Just as I am so thankful my Lord Jesus takes an interest in my life and He helps me.  He is powerful above all things, He is merciful, and He is King.  He stepped out of His own, became man so that He could save us, know what we deal with, help us, guide us and lead us to a life with Him.  A life where we can rest, drink from living waters, and live life relieved.
"Have you not known?  Have you not heard? The everlasting God, the Lord, the Creator of the ends of the earth and all living things, neither faints nor is weary.  His understanding is unsearchable.  He gives power to the weak, and to those who have no might He increases strength.  Even the youths shall faint and be weary, and the young men shall utterly fall, But those who wait on the Lord shall renew their strength; They shall mount up with wings like eagles (or swans), the shall run and not be weary, they shall walk and not faint".  Is. 40:28-31 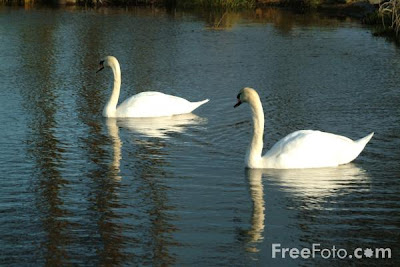 That swan is still there and I noticed another has joined him.......like him we are never alone. Amen.
Posted by Madre Minutes at 6:41 PM