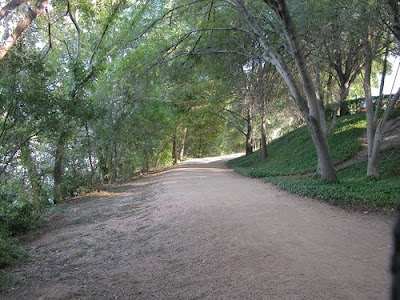 You know sometimes it just takes a change of scenery to gain a whole new perspective. Last week William and I traveled to Austin for the day to pick up some jewelry I had there for a trunk show. We also needed to run a long run so decided to run Town Lake. Now if you are not familiar with Town Lake in Austin, TX then you are missing out. It was a gorgeous day and lots of people and their dogs were out and about. It was exciting, it was exhilarating and motivating. Running in Kerrville is hard sometimes cause the routes we pick usually involve hills and they just kill us. This is nice and flat pretty much and there is so much to look at, it makes your run go by so much faster. I ran/walked 6 miles and felt so great decided to go for another 3. Along with seeing a man sitting on a rock with a squirrel perched on the neck of his guitar, an old roomate, a woman walking her dog who was in a baby carriage, the frat rats chasing the sorority sweethearts, all the dogs and Lance Armstrong, there was the beauty of the lake. The light sparkled yes like diamonds, the breeze hit as you came into a clearing and the birds sang as you plodded along. I really was not paying much attention to how far I was going or if I was uncomfortable. Isn't that the way our walk with God should be? Where it becomes so natural and easy that we are not having to pay attention to what we are doing and we only pay attention to what He is doing. When we keep our eyes on the prize, nothing else seems to matter. 2 Chron. 16:9 "For the eyes of the Lord range throughout the earth to strengthen those whose hearts are fully committed to Him". I had my praise music on, I was thinking about Him, my week, my children, praising Him as I went along even when it hurt. He strengthened me as I went on, pressed on and pushed through the pain. Having my eyes on Him helped me not think about what my body was going through..... "But my eyes are fixed on You, O Sovereign Lord; in You I take my refuge." Ps. 141:8 I was able to look around which distracted me and kept me occupied yet my mind was fixed on Him. My worship music helped me do that. Prov. 4:25 "Let your eyes look straight ahead, fix your gaze directly before you". Well there was so much to look at right in front of me it made it much easier. He made it easier for me. When I fix my eyes on the Lord He makes my path much lighter and the road under my feet feel like it has been less traveled. "So we fix our eyes not on what is seen, but on what is unseen. For what is seen is temporary, but what is unseen is eternal". 2Cor. 4:18. If all those people and things had not been there to distract me it would have been harder no doubt. So God is asking me to fix my eyes on Him when times get tough, when the road gets rugged and He will direct my path and shine His light upon my feet. The challenge for us as Christians is to be able to stay focused on Him when we have the distractions, and/or for some of us who create distractions that take our focus off of Him. Finding Him is easy cause He is always there, keeping our eyes on Him is what He is calling us to do. As we see in this photo how empty this path looks without all the people, so the run for some would have been more difficult, but when I look to Him, He makes it a lot easier. Let Jesus be our distraction, so to speak, that helps us get through. He is watching us and looking for, throughout the earth, those who seek Him in every aspect of our walk/run with Him. Amen!
Posted by Madre Minutes at 4:31 PM